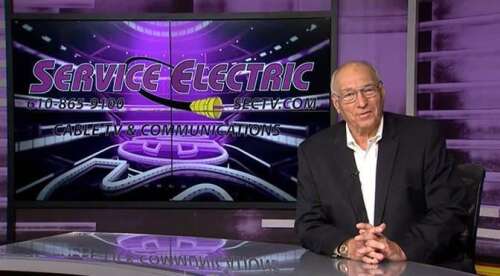 Jack Capparell, General Manager of Service Electric Cable TV, has been inducted into the “Class of 2021 of Cable TV Pioneers”.

“I’ve been fortunate to work with some of our industry’s greatest innovators and pioneers, especially John Walson, founder of Service Electric Cable TV,” said Capparell, who has spent his entire professional career at Service Electric.

“I’m honored to be one of the pioneers of this great industry,” Capparell said.

“Just as our industry rose to the challenge of keeping America connected last year, these men and women have continued to make meaningful contributions on the fronts of their business, their homes and their communities,” said Pioneer President Dave Fellows.

“The Class of 2021 exemplifies the ‘pioneering’ spirit and commitment to doing the best you can, no matter the circumstances,” Fellows said.

Capparell began his career at Service Electric in 1964 when the cable television industry was in its infancy and had 12 channels and used tube amplifiers.

Capparell has witnessed the exponential growth of the industry and the dramatic evolution of service offerings over the years.

Capparell was instrumental in several milestones, including the 1972 launch of the United States’ first pay-TV service, Home Box Office, in Wilkes Barre.

In 1947, John Walson ran a cable to connect his home appliance store in Mahanoy City, Schuylkill County, to an antenna tower atop a nearby mountain, ultimately connecting homes in the community.

As a result, the cable television industry was launched in the United States. This model was copied throughout the country in areas where television reception was difficult or impossible.

Service Electric is the birthplace of Home Box Office (HBO), launching the nation’s first premium subscription service to the Wilkes-Barre market in 1972.

Walson was guided by a fundamental principle: people wanted quality access to television and his duty was to provide it.

Service Electric, which is still a family business, continues to build its good reputation in the cable industry, offering a variety of television, Internet, telephone and telecommunications services.

The Cable TV Pioneers, founded in 1966, are made up of individuals responsible for building the systems that have become the core of today’s cable broadband industry.