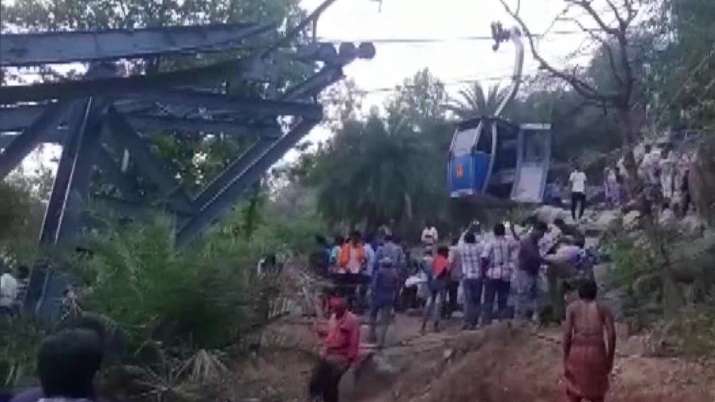 Deogarh Cable Car Accident: Two people lost their lives while several others were injured after two ropeways of a ropeway collided on the Trikut hills near Baba Baidyanath temple in Deoghar district of Jharkhand on Sunday, according to a PTI report .

Witnesses mentioned that at least 50 people could still be stuck in at least 12 cabins. According to sources, a rescue operation is still underway and among the injured are critical.

According to the initial investigation, the incident appeared to have occurred due to a technical problem, which led to the collision of cable cars. The exact cause, however, remains to be determined. A couple were seriously injured after attempting to jump from a cable car following the incident. They were admitted to hospital, he said.

NDRF team, cops on the spot

A National Disaster Response Force (NDRF) team has been deployed to the scene for the rescue operation, Deoghar Deputy Commissioner Manjunath Bhajantri said.

Bhajantri said the villagers were also helping the NDRF in the rescue operation.

“The situation is completely under control. Some people are still stuck in the ropeways of the cable car and they are being rescued. All tourists are being evacuated safely,” the DC said, while calling on people not to spread rumours.

According to Jharkhand Tourism, Trikut Cable Car is India’s highest vertical cable car with a maximum lens angle of 44 degrees.
The cable car, located about 20 km from the Baba Baidyanath temple, is about 766 meters long, while the hill is 392 meters high.

There are 25 cabins in the cable car. Four people can sit in each cabin. The cable car manager and other employees fled the scene after the incident.